Every ending presupposes a new beginning. Especially in Louis Vanhaverbeke’s multiverse, where people and things are in constant motion and enter into new combinations. In Mikado Remix, the small but mysterious white box to which this Ghent artist dedicates the last song in his MULTIVERSE (2016) takes the form of a life-sized shack. Is it a refuge, a cell, a theatre within a theatre or a metaphor for the soul that resides in our body?

The box on stage is built using Heras site fencing, a material that has appeared quite often in Vanhaverbeke’s work over the last few years, work in which recycling plays an important part. In Secured Court (2011), an intervention in public space as part of the Bâtard Festival, he asked several youngsters to play a basketball match while manoeuvring around a construction made of metal fencing. As a handyman and multi-artist, Vanhaverbeke is fascinated not only by the multifunctional nature of this sort of fence – you see them on building sites, in traffic, at festivals and flea-markets – but also by the simple performative gesture by which you can use them to mark off and transform a space. Make a square with four pieces of fencing and you are closing something off, but also closing something in. You can look through the bars both inwards and outwards, but the isolation remains complete.

Mikado Remix is intended to examine precisely this relationship between inner and outer worlds. Vanhaverbeke explores the boundaries (existent and non-existent) of his own mind on the basis of his own lyrics, DIY video images and a loop station. While tacking between claustrophobia and free fall, he tries to make contact with the audience, thereby breaking open not only his own mental box, but also that of the theatre. Can we ever reveal to ourselves or others what is going on in our deepest mental universe? And how does our consciousness influence the ‘objective’ reality we observe around us? 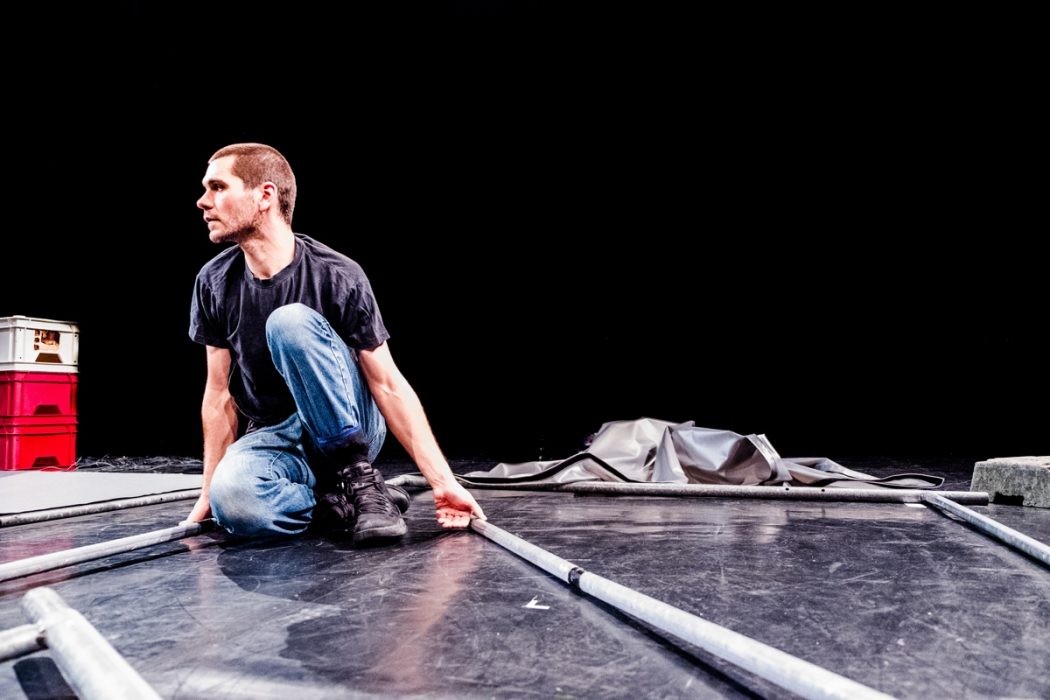 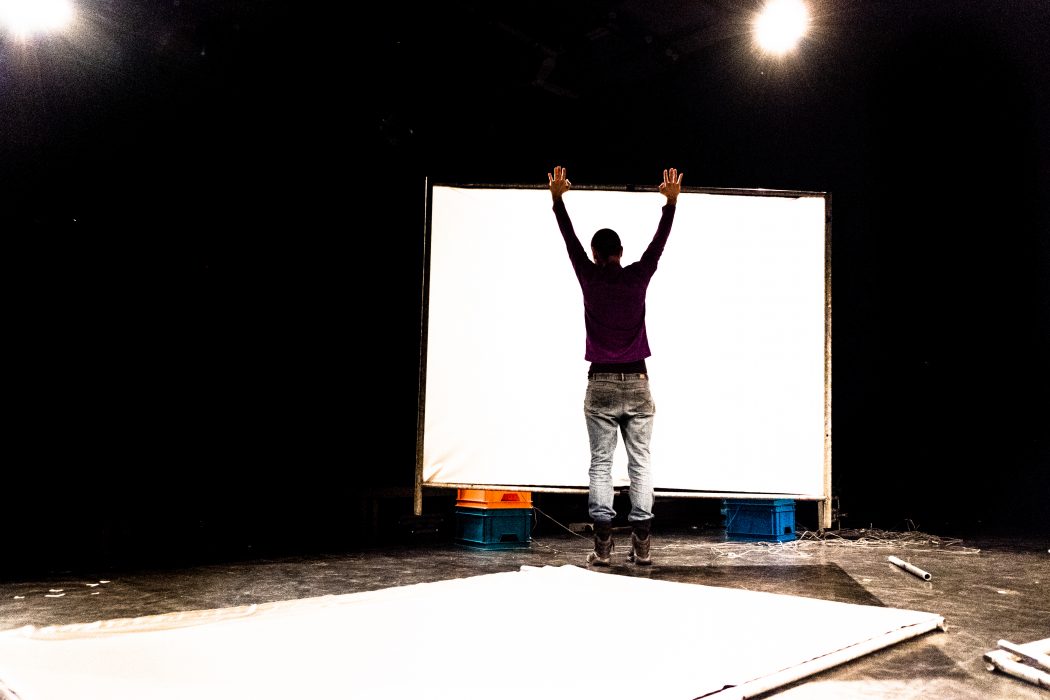 The ‘fundamental philosophy’ of the security experts Heras, which is one of the world’s most important manufacturers of latticework and fences, is that freedom and security are inseparably linked. This conviction is founded on a paradox, because it is of course only by limiting the other’s freedom that our security can be guaranteed. In Mikado Remix, Vanhaverbeke examines this human and social urge to restrict and its paradoxical impact. What do we gain by constantly drawing lines – both concrete and metaphysical – through the space we live in? Lines that become angles (sometimes blind), or boxes (open or closed).

Boundaries are the basis of our blocks, streets and cities, our identity, perception and world-view, of our nation states and languages, and of our conception of community and health. They provide codes by which to understand the world, frameworks by which to live together with others and structures for our actions. In short, they offer certainty, protection and challenge.

Or perhaps not. A boundary may be as inclusive on the one side as it is exclusive on the other. After all, to what extent do we make our most profound ‘self’ conform to these artificial compartments and boxes, and at what cost? At what stage do the four walls we build around ourselves for protection become a cage? One of the most commonly Googled questions is ‘How can one be normal?’ Together with the geographical-national borders that are at the heart of political debate, psychological, social and physical normality is at the moment possibly one of the most significant boundaries that we as individuals and societies want to establish. The symptoms of this urge are routine and conformism, and quantification is the method. As Malvina Reynolds already sang in 1962: ‘Little boxes on the hillside, (…) and they all look just the same. And the people in the houses, (…) they all look just the same.’ Staying in line provides peace of mind, just like the popular loops Vanhaverbeke produces from his music computer. They are mirrors of the thought loops we produce every day. We create them ourselves, and yet we are still enslaved by them.

Vanhaverbeke suggests that in this sense normality is above all a boundary that exists by grace of who or what lies outside the norm, who or what is condemned to a place outside the centre – with high walls, safely removed from sight – like the prison, the isolation cell, the institution, the camp and the rest home. But while the limit of tolerance in political discourse is increasingly being set higher, politicians implement asocial changes under the pretext of ‘just acting normally’, and nuclear weapons that can destroy the whole world are just a playful threat in a political soap opera, insanity seems more than ever to be a relative notion. In fact for many it may be a deliberate way out. The box becomes a bunker. Can we hear when someone inside screams? 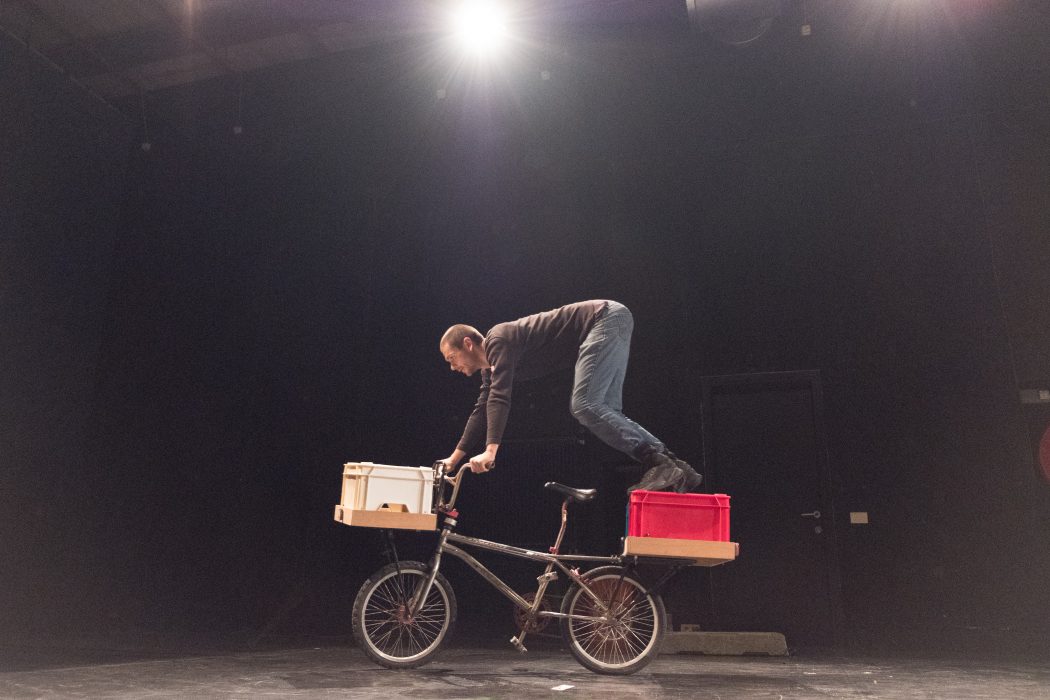 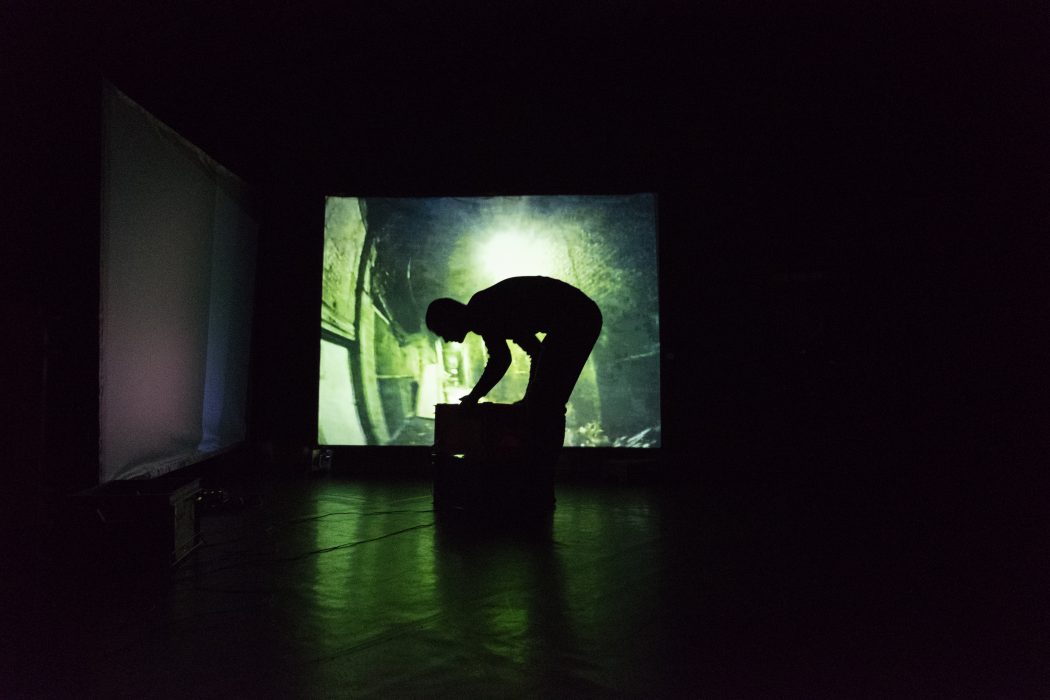 From circle to straight line

So, after the circular choreography of the alternative story of creation in MULTIVERSE, in Mikado Remix it is the straight line that becomes the basic motif. As is always the case in Vanhaverbeke’s work, the concrete form and the metaphorical meaning are inseparable. In this choreographer’s hands, the line becomes a wall, a ceiling, a piece of territory, but also a line of defence, an opposition, a confrontation, a limit. He builds, moves, and tinkers with the focus of a construction worker and the poetry of a dancer. Shifting between productivity and pointlessness, an inward gaze and a worldly perspective, he tries to localise himself in a world on the blink.